History of Rangers in Western Australia

The transition from our early days as a new colony through to today’s modern Australian society, saw a rapid rise in the number of dogs and the need for animal control and welfare laws. 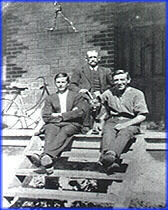 The first known Ranger in Western Australia was appointed to round up straying cattle. This photo shows Mr Jarvis and sons and was taken in 1930 near Perry Lakes, City of Perth.

Archive photo used by kind permission of the Town of Cambridge.

The first modern day Rangers were authorized in around 1972. They had no training, no uniforms or even job descriptions but in time started to become organised. A small number formed an association in 1978 known as the “Municipal Law Enforcement Officers Association Inc” (MLEOA), and through this fledgling group started to raise the profile and reputation of Local Government Rangers.

The two photos above, taken in 1977, show one of the first City of Perth “Park” Rangers with a uniform, vehicle and the job of looking after recreational areas and wildlife with other officers being appointed to either parking, dog or litter control.

Prior to this in the early days of municipal law enforcement, each officer had his or her specific job and duties to perform.

Training began through the MLEOA.

Changes were on the way! Multi-skilled enforcement patrols were being introduced with outstanding results.

What are multi-skilled duties?

Yes, in the beginning officers were dedicated to parking, dog control, park care or litter control, one person, one job only. This was eventually viewed as a waste of human resources.

Councils soon realised the value of training and authorising their officers to perform a number of duties and to enforce more than one or two laws relating to Local Government operations. The result, “Community Rangers” provided a better service to residents, business community and visitors in their areas.

Whether taking a lost dog home to its family or fighting out of control bushfires, our WA Rangers are highly trained, fully equipped and ready to deal with any situations as they develop.

Designed by Zap IT.